Carter Weaver, Sheriff of Georgetown County, has announced the arrest of a Murrells Inlet woman in connection with a pair of recent robberies.

Dawn Allyson Czaikowski, 38, is accused of entering the Speedway convenience store in Murrells Inlet and, with her hand hidden in her purse as if armed with a deadly weapon, demanded the cash from the register on the night of Sept. 26, 2020. 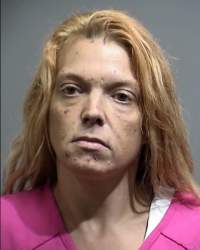 Armed robbery warrants were obtained for that incident, and Georgetown County Sheriff’s Office deputies scoured the community in efforts to locate and arrest Czaikowski. She remained on the run, and, on Sept. 29, 2020, she was accused of committing another robbery. This time, she allegedly tricked her way in to an elderly woman’s Murrells Inlet home and began to demand money. The woman said when she refused, Czaikowski attempted to run off with her purse. The elderly victim said she struggled to keep the purse, and Czaikowski assaulted her, breaking or dislocating the victim’s finger in the process, as well as ripping her phone cords out of the wall so she could not call 911. She then fled the scene, and the victim ran to a neighbor’s home to notify law enforcement.

Early this morning, deputies and Investigators located Czaikowski at her residence, hiding in a closet to avoid detection. She was taken into custody without incident and transported to the Georgetown County Detention Center.

Charges of Assault and Battery 1st Degree, Burglary 1st Degree, Strong-Armed Robbery and Kidnapping are being sought in connection with last night’s incident. Czaikowski remains incarcerated at the Georgetown County Detention Center where she awaits a bond hearing.

There are no comments yet. Be the first to add a comment by using the form below.